Two of my friends ride BMW F800 GS motorcycles and love them, especially when they head off road.  Personally, I've avoided the BMW "hype" and yet I've been interested to see what the mid-sized GS family was all about.  This past weekend I had the opportunity to take the F800 GSA out for an hour to see what it was like.  Unfortunately I had to keep the bike on the pavement, which is where most riders would likely ride anyway. 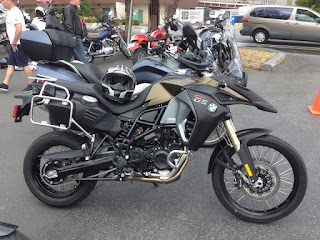 BMW makes two mid-sized Adventure motorcycles, the F800 GS and the F800 GSA.  The two big differences between the two motorcycles are the fuel capacity and the "goodies" that are included in the GSA version.  The GS comes with a small 4.2 gallon fuel tank which is fine for riding in areas where gas is easily found.  The GSA adds an additional 2.1 gallons, which means you'll be more comfortable riding in places where the next available gas is far away.  The other difference between the two is the GSA comes with a engine guards and rear guards / pannier mounts.

The performance numbers of the F800 GS / GSA are identical.  85 hp at 7,500 rpm and 61 ft-lbs of torque at 4,000.  While the horsepower is good for a parallel twin engine, the note worthy number is how early the torque hits it's peak.  This is one of the reasons it performs well in the dirt.  Another plus in the off road department is the 9.1 inches of suspension travel in the front and 8.5 in the back.  I've read that the springs in both are soft, however on the pavement it felt well suspended.

One big negative about the F800 GSA is the weight.  This mid-sized motorcycle tips the scales, fully loaded with fuel, at 504 lbs, which is only 20 lbs lighter then the R1200GS.  While weight is one thing, how it feels is also important and the F800 GSA feels heavy.

The engine on the F800 GS / GSA is "underwhelming" and that is an advantage off road.  On the pavement the motorcycle feels "bland".  Accelerate feels strong at first with the torque peaking at 4,000 rpm's, however it feels like it runs out of momentum at about 5,000 rpm's and you have to shift to keep things interesting.

The F800 GS / GSA comes standard with ABS and you have options like ESA, which adjusts the suspension based on the riding conditions and ASC (Automatic Stability Control), which is BMW's name for traction control.

I played around with the settings and found that the "Normal" mode for the suspension was best for the road and I'm not a fan of traction control with an engine this size so I turned the ACS off.  On the road, I found the F800 GSA to be stable and it was easy to turn in and accelerate out of tight corners.  I'm use to riding a motorcycle with a 21" front wheel and was impressed with how "sporting" the bike felt on the pavement.

In summary, here are my low and high points for my first ride on the BMW F800GA

F800GSA "high" points.
Overall the BMW F800GSA is a complete package for someone looking for a good quality, long range adventure touring motorcycle that will actually perform very well in the off road setting.  BMW offers a worldwide network of dealers for support and there is plenty of factory and aftermarket "goodies" to improve the already good package.

Gerald Trees
Dream Your Ride
Posted by Gerald Trees at 18:59 No comments: