Skyline Drive is a beautiful 109 mile road that begins near the town of Front Royal, Virginia and runs along the top of the Blue Ridge Mountains in Northern Virginia.  The drive covers the entire length of the Shenandoah National Park and was built between 1931 and 1939.  The drive ends near Waynesboro, Virginia and becomes the northern entrance to the Blue Ridge Parkway. 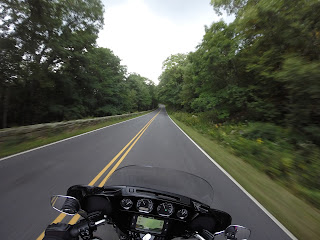 With a speed limit of 35 mph, plan to spend at least 4 hours to complete the full length of Skyline Drive.  There are plenty of scenic overlooks that will add more time to your experience.

The road is kept in amazing condition and the sights and smells of the forest add to the experience that are only available with a motorcycle (or convertible car).

If you get tired of the scenery, there are a few exits off Skyline drive that will take you off the mountain crest and into other areas of Shenandoah National Park. 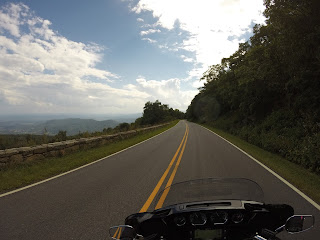 Gerald Trees
Dream Your Ride
Posted by Gerald Trees at 08:01 No comments:

For years, perhaps decades, critics have predicted the demise of Harley-Davidson because the motorcycles are "old" technology and have failed to keep pace with the Japanese and European motorcycles.  Harley-Davidson has chosen to ignore the critics and listen to those who ride their motorcycles and as a result sells more motorcycles over 650 cc's then any other manufacturer. 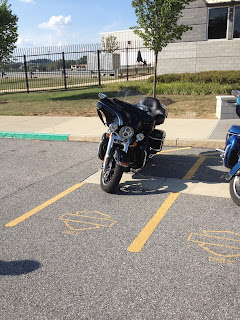 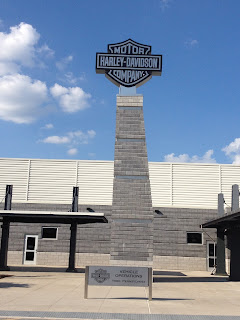 We took the Ultra Limited back to it's "Birth" place in York, Pennsylvania


In 2014 Harley- Davidson introduced their Rushmore Project line of touring motorcycles, motorcycles that were designed with significant input of owners.  The goal was to make a more refined touring motorcycle that keeps the Harley-Davidson "charm".  A goal that was met and then some.

The motorcycle that I took out for 7 days, with the help of Liberty Harley Davidson in Rahway, New Jersey, was a 2015 Ultra Limited with less then 6,000 miles on the clock.  On the surface the motorcycle looks similar to the Electra Glide / Electra Glide Ultra  model that first hit the showroom floors in the 1960's and close to identical to the 2013 model.  That's only on the surface, which to say the least is iconic and very popular among V-Twin enthusiasts.

Digging a little deeper there are a number of changes (improvements) to the outside package.

First, there's a lot more storage capacity.  The saddlebags deeper, wider and a little longer.  They also open much easier with a single lever that's hidden between the saddlebag and the motorcycle.  The Tour-Pak or trunk is also larger without looking out of place on the motorcycle.  It's also raged to carry more weight.

Second, the nerf bar (crash bar) that's in place to protect the saddlebags is closer to the bags and doesn't hit the passenger in the back of the legs.  This may seem minor until you get a passenger with shorter legs on the motorcycle.

The final change to the outside package is the Batwing faring.  It looks the same, however there were subtle changes made based on wind tunnel testing which has made the motorcycle much easier to handle, especially in windy conditions.  There has been a vent added between the windshield and the faring that takes away much of the buffeting and "suction" that's common with large touring motorcycles.  All this makes the ride more pleasant for both rider and passenger.

Getting under the skin of the big Harley you'll find more changes which make huge improvements in the handling and performance on the road.

The chassis was changed to improve stability and enhance cornering and the front fork was beefed up by increasing the diameter to 49mm from 42mm.  The steering head was stiffened up and the damping of the forks tuned to improve cornering while keeping the ride smooth and comfortable.

The Ultra is powered by a high output 103 cubic inch twin cam engine. Yes, this is still an air cooled (with a new water "twist"), overhead valve, pushrod engine that shakes like an out of balance washing machine at idle.  Old technology by engine standards and yet a key ingredient to the Harley-Davidson motorcycle.  The new engine has been tuned to kick out 105 foot pounds of torque and is married to a 6-speed overdrive transmission that gets every ounce of power from the engine to the rear wheel.  The new Rushmore project motorcycles have added a water cooling system, however this cools the exhaust ports only.  This lowers the heat that the rider would feel on the older models and improves overall performance of the engine.

After putting over 2,000 miles on the 2015 Harley-Davidson Ultra Limited in 7 days, complete with my wife on the back and the luggage filled I can say this is the best Harley-Davidson touring motorcycle I've ridden to date.  It's comfortable, handles very well for a large motorcycle and is equally happy on the highway as it is carving up curvy mountain roads.

Our test / trip covered 8 states and took us down the famous Tail Of The Dragon in North Carolina / Tennessee along with the little known North Carolina state route 151, otherwise known as the Devils Drop.  This road drops (literally) off the Blue Ridge Parkway southwest of Asheville, NC.  In the first 4 miles of tight corners you'll drop 1,700 feet in elevation.  That's an average 8% grade and I can tell you there are sections that are much steeper than that.  The big Harley-Davidson was easy to maneuver down both roads. 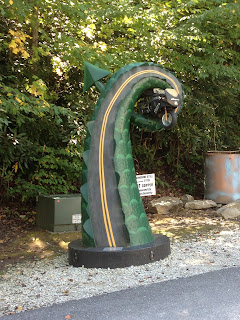 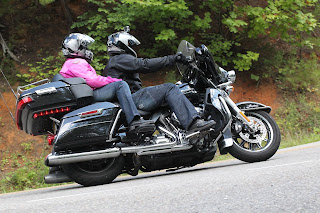 Playing on The Tail Of The Dragon

One of the "perks" of the new Ultra Limited, and the other touring Harley-Davison's as well, is the Infotainment system.  This is a combination radio / satellite radio / sound system that also includes an easy to use and read GPS system.  I've always avoided guidance system electronics in favor of a real map, however after playing around with this system I became hooked.  I found it easy to program and when it was programmed to take the scenic route (other modes include shortest, fastest, curves and toll avoidance) we found places that were "scenic".  This included crossing one of six remaining covered bridges in Maryland.  The system also made navigating the New York / Newark highways easy and allowed me concentrate on traffic. 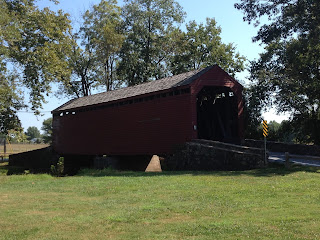 The Harley-Davidson Ultra Limited is a large touring motorcycle that appeals to the senses of the rider who appreciates the classic Harley-Davison look, sound and engine vibration but wants a motorcycle that handles well and is comfortable.  In short it works.

More information about this motorcycle can be found at www.harley-davidson.com.

Posted by Gerald Trees at 23:14 No comments: