My First "Date" With The BMW S1000XR - Motorcycle Reviews

Disclaimer:  I refer to motorcycles as "female".  I always have and always will.

There she is!  The beautiful, long-legged Bavarian you've been reading about and seeing in the glamor magazines.  Her numbers seem to match her physical beauty.  160 hp, 500 lbs and 83 lb-ft of torque.  Pure motorcycle lust and now you're meeting face-to-face.  You're checking her out, getting a feel for all she has to offer when the person in charge of introductions asks if you knew about her clutchless shifting option.  You didn't and now you're even more smitten by this beauty. 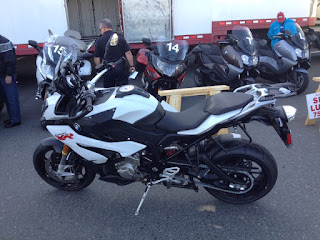 Now it's time to take her out on a "date".  The first "date" is with a group of her friends and you're under the watchful eye of her "managers".  They want to make sure nothing gets out of hand.  You fire her up and her voice is sweet, but a little weak.  Out on the road she feels OK, not as exciting as you'd imagined and there's this annoying vibration through her handlebars.  Perhaps this is the way she is at the start and it'll smooth out once you get to know her better.

The pace picks up and now you're spending quality time riding sweeping corners on country back roads.  You find her cornering ability to be precise, but she's not as fun as the Italian beauty you've dated in the past or the spunky Brit that you've been spending a lot of time with lately. And what's with the vibration?  It's still there! 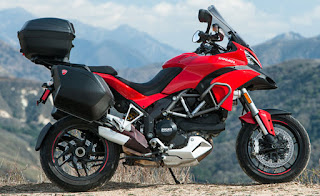 On a long stretch of pavement you have the opportunity to see how fast she really is and twist the throttle.  There's a slight hesitation and then BAM!  Now that's more like it, you think, and the clutchless shifting is awesome.  That vibration is still there and it's annoying!

The first date is over and while you could be persuaded to go out on a second date, you realize that as beautiful as she is, she didn't make you smile and laugh out loud like your current British squeeze or get you're heart racing like the Italian did.  And that damn vibration... 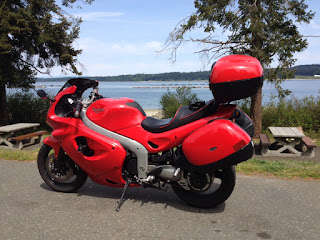 Choosing a motorcycle based on physical appearance and given numbers is about the same as choosing a date from an online dating site.  Sometimes you're pleasantly surprised and sometimes not so much.  While photos, magazine and YouTube reviews help, keep in mind that the test riders have their own riding styles and biases.  The only way to truly find out if you're compatible is to go for a ride.  Several rides, if you can.  If it's "allowed", try to spend some alone time as this is where you can see what the motorcycle is really like.

Have fun finding your next motorcycle, even if it takes a lot of "dates" to get the right one.

The Moron Family Take A Summer Vacation! Be Careful!

I’m on my way home from a nice Saturday afternoon ride.   This time of year the only road into town, a fun corner filled two-lane, is filled with people on vacation.  I’m following a car that’s just signalled to make a right hand turn onto a side road.  The car gets as far over to the right as possible to allow traffic behind him to keep going without stopping.  So far, so good.  As I’m passing this car to the left, the car behind me passes me on the left, going into on-coming traffic.  Seeing the “error of his ways” the driver proceeds to cut me off getting back into the correct side of the road before being hit head on.  Needless to say I’m mad!

After getting my heart rate down to sub-humming bird speed and shouting a few choice words into the wind, I saw that the Moron was not from these parts and was probably on his way to the coast to see what real waves look like.  The license plate indicated this particular breed of Moron was from the “flat land” and would morph into a wimp once he hit the mountain corners.  I would get my chance to show him how I felt about being cut off.

Sure enough, Mr. Moron couldn’t handle the twisties and was now going slower than some people walk.  At the next safe passing area I pulled beside Mr. Moron, gave him a “nice” wave and with a shake of my head and a twist of my right wrist I became a dot in Mr. Moron’s view.

Summer is the best time to ride because it’s warm and dry (usually).  It’s also the most dangerous because the Moron family goes on vacation this time of year and it’s a big family.

Members of the Moron family are easy to spot.

They drive like there’s no one else on the road but them.

The turn signals on their car are in mint condition as they are seldom used.

Members of the Moron family drive like they have a spastic right leg.  Fast, slow, fast, slow, slow, fast...  If you’re on a two lane they’ll drive slowly until they reach a passing lane and then accelerate like they’re in the NHRA finals.  Of course they hit the brakes when the lane ends and someday I’m sure a drag shoot will be deployed. 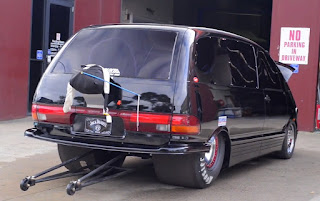 Great on the straights but limited cornering ability...

Speaking of brakes, they’re the most used part on their car as they’ll slow down or stop without warning if something that even remotely resembles a vacation photo op comes up. 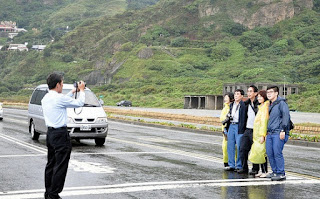 Morons also have the bad habit of trying to smoke, talk on their cell, scratch their (use your imagination) and drive at the same time.  Too bad part of the Moron family trait is not being able to do two things at once.  It’s in the genes.

Members of the Moron family can also be found on foot.  They’re the people who dash out in the road to take a picture or run across the road to hit up the ice cream stand.  Did I mention they also like to walk down the middle of the road?

Unfortunately a few members of the Moron family ride motorcycles but natural selection keeps their numbers small.  They’re also easy to recognize.  Shorts, flip-flops and tank top are their safety gear.  They also have a size and space discrimination issue as they love to get as close as possible to the large vehicle in front of them or cut in between two larger vehicles.  They're oblivious to the consequences of being hit by something larger then them.

Finally, watch out for the Moron Family caravan.  They're driving the fleet of rental RV Motor Homes in covered wagon formation.  Having never driven anything larger then a Prius, they get the idea to rent a mid-sized cargo truck outfitted as a vacation home and hit the road.  For some reason they choose the route with the tightest corners and steepest cliffs to practice.

If you have a credit card with a big enough limit anything is possible...

Summer riding season is great, however be on the lookout for members of the Moron family.  Don’t let their vacation ruin yours.

Gerald Trees
Dream Your Ride
Posted by Gerald Trees at 08:04 No comments: